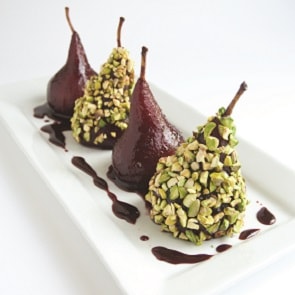 Ingredients for Pears in Pomegranate Juice:

Variation: Chop 1 cup raw or toasted pistachios into bits about 1/8-inch thick. Set the pistachios in a coarse strainer and shake to strain out any very fine, powdery bits. Put the chopped pieces in a bowl. After drizzling the pears with syrup, roll them in the pistachios to coat evenly. Set the pears on dessert plates and pour a little of the syrup around them. Serve at once.