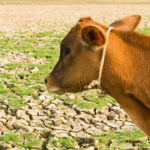 According to a study published in the Proceedings of the National Academy of Science, adopting a vegan diet will not only make you healthier, it will help the planet, as well. Researchers evaluated the positive changes that would take place based on four scenarios, each involving diets with varying amounts of meat. Adopting a vegan diet could lead to the prevention of more than 8 million deaths by the year 2050. Additionally, the vegan diet could lessen the greenhouse gas emissions associated with raising livestock by 70 percent.

If healthy bodies and a healthy planet don’t provide enough motivation, consider the financial benefits: the study’s researchers predict that at least $1 trillion in health care costs and lost productivity could be saved by changing dietary habits. These savings increase to $30 trillion annually when putting a dollar value on lives lost due to unhealthy food consumption. Imagine the increase if researchers took into consideration the cost of today’s severe weather events that can be attributed to global warming.