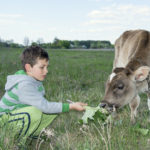 The foundation for ethics is sentience – the capacity for an organism to feel pains and pleasures. Through most of recorded history, humans have given little thought to the ethical implications of animal sentience. Animals have been, and for the most part continue to be, looked upon merely as things for us to use. If the human relationship to animals were placed in a moral framework, that framework might be called “might-makes-right,”or “bright-makes-right.” We have used animals because we have had the power to do so, with little thought to whether we ought to do so.  Might-makes-right has been coming under growing criticism during the past two centuries, and especially during the last 40 years. One of the drivers of this change has been science – specifically, studies of animal behavior that reveal the complexity of animal experience. For most of the 20th century the study of animal experience was considered taboo by prevailing scientific dogma. Then, within a year of the publication of Peter Singer’s influential 1975 book “Animal Liberation,” a highly respected American biologist named Donald Griffin published a book titled “The Question of Animal Awareness.” It was the first book since Charles Darwin’s time to present a scientific discussion of animals’ minds. Today, thanks in part to Griffin’s contributions, a week scarcely passes without some fascinating new scientific discovery about animal intelligence, awareness or emotions being reported in the news.

Our sense of superiority over the rest of animal creation has always been founded on our superior intellect. For two reasons, intelligence provides a shaky foundation for the treatment of animals. First, intelligence does not predict sentience. There’s no valid reason that a mouse should feel the prick of a needle any less acutely than does a human. The British Clergyman Humphrey Primatt (1735-1779) said it eloquently: “Superiority of rank or station exempts no creature from the sensibi then disappear just a half second later, five-year-old chimp Ayumu casually touches the exact locations on the screen in the order that the numbers appeared. He can recall all 10 digits consistently, whereas the average human rarely gets beyond three or four. When the British memory champion Ben Pridmore – who can remember the order of a shuffled deck of cards in 30 seconds – competed head-to-head against Ayumu, the chimp performed three times better.

Recent studies are also revealing not only that animals have emotions, but that they have moods or dispositions – what I call ambient emotional states. For example, most of us have had periods in our lives when we are feeling down or depressed, or positive and full of optimism. Starlings appear to have similar feelings. Birds kept alone for 10 days in impoverished cages take a pessimistic view; they are much less likely than enriched and stimulated birds to investigate a dish that may contain either palatable or bad tasting food. Rodents, primates and  other animals confined for long periods in unstimulating farm or laboratory cages develop neurotic behaviors that reflect long-term negative emotional states. Baboon mothers who have lost an infant enter a period of mourning – the scientists call it bereavement – that lasts for several weeks. And like human parents, the bereft mothers seek emotional therapy by solidifying their social networks: they engage in more grooming bouts, which helps soothe the baboons’ anguish and better enables them to “move on.”

Once thought the sole province of humans, language – in which sounds or symbols are used to represent other objects that may be separated in time and space – has now been described in many species. Chickens have a vocabulary of more than 30 specific calls, including small-, large- and intermediate-sized aerial predators. Roosters entice hens with a “food solicitation call.” Occasionally, a rooster deceptively uses the call when there is no morsel present; hens soon learn to identify a cheater, which ensures that most roosters remain honest. Prairie dogs have about 20 different words for different predatory threats, each of which elicits an appropriate response even if the listener has not seen the threat himself or herself. Owing to heavy human persecution, many colonies have added a call for “man with gun” to their vocabulary.

Only recently have scientists begun entertaining the idea that animals have a sense of right and wrong. Yet we should not be too surprised that animals behave virtuously, or that they may have the rudiments of moral awareness, because social living requires that individuals make compromises and take others into consideration. During rough-and-tumble play, animals signal to each other that they will not bite too hard, and larger participants play less roughly to sustain the playful interaction. Studies with dogs and monkeys show that both have a sense of fairness. A monkey will refuse to continue “paying” for cucumbers if another starts to receive preferred grapes in exchange for a token. A dog will stop offering a paw if only the other dog is being given a treat for doing so; the refusal is not based on boredom or fatigue, for the same dog will continue to offer a paw for no treat for much longer if there is no second dog present.

Another way animals show goodwill to others is through cooperative breeding – in which mature adults forego breeding to help others raise offspring. It is widespread in mammals, birds and fishes. For instance, when a pair of Princess of Burundi cichlid fishes of Lake Tanganyika raise their brood, they are typically assisted by five helpers of  both sexes, who may or may not be genetic relatives of the breeding pair.

This is just a brief sampling of numerous studies coming to light that show that animals are highly sentient and that they have complex inner lives. These developments present both a paradox, and great promise. The paradox is that, even though our moral awareness of animals is unprecedented, we continue killing animals in unprecedented numbers. The Food and Agriculture Organization estimates that in 2005, humans worldwide killed 50 billion (land) animals to be eaten. And with a growing human population and the global spread of Western, meat centered dietary habits, that figure continues to climb.

The promise is that we are on the cusp of a paradigm shift in our relationship to animals. There is a proliferation of university courses in animal ethics and animal law, in books on animal ethics and veg*n lifestyles, and in laws protecting animals and banning cruel farming practices. In 1997, the European Union officially recognized animals as sentient beings able to feel pain and emotion, and on both sides of the Atlantic, the worst of factory farming practices are beginning to be banned. In Holland, the Party for the Animals – the first of its kind –has made rapid gains since its formation in 2002, most recently winning 4 percent of the Dutch popular vote, and is now on the brink of winning one of Holland’s 25 seats in the European Parliament.

With the rise of new problems linked to the consumption of animal products – including climate change, zoonoses (diseases passed from animals to humans) and the epidemics of obesity and diabetes – the human race is being forced to reassess its self-centered past. No longer can we afford to run roughshod over the planet and its sentient inhabitants. Never before has compassionate living been more clearly in our own best interests. The vegetarian movement is a vital cog in the wheel of these reforms.

Jonathan Balcombe is a biologist based in Washington, D.C. He is the author of “Pleasurable Kingdom: Animals and the Nature of Feeling Good” (Macmillan, 2006), and two forthcoming books: “Second Nature: The Inner Lives of Animals” and “Exultant Ark: A Pictorial Tour of Animal Pleasure” (University of California Press, CA. September 2010).`