On the Marshall Islands and at Home 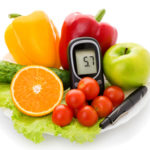 Imagine children gobbling up ramen noodles with dry Koolaid powder sprinkled on top for breakfast; adults eating cake donuts or pancakes prepared with a cup of sugar and smothered in syrup, and families dining on white rice and meat for lunch and dinner every day.

What kind of meat? Spam, canned corned beef, chicken, fish, crab, octopus, turkey tails, turkey necks, turkey hearts, pig’s feet, pig’s intestines, beef tongue or whatever meat is accessible. Imagine the beverages of choice being soda, fruit-flavored sugar-laden drinks and coffee with powdered creamer and sugar. Does this all sound a little far-fetched? One could only hope. Unfortunately, these foods are standard fare for people in Majuro, Marshall Islands. Diets of many other South Pacific islanders are strikingly similar. It would be difficult to design a diet that could more efficiently induce diabetes and other chronic diseases in any population. Not surprisingly, the rates of diabetes among the people of these islands are among the highest in the world.

In the Marshall Islands, an estimated 28 percent of individuals over 15 years of age have type 2 diabetes. For those over 35 years, the figures are closer to 50 percent. Not surprisingly, nearly 75 percent of women and over 50 percent of men are overweight and obese. About half the surgeries preformed on the island are amputations due to complications of diabetes. There are no facilities for renal dialysis.

Fifty years ago, diabetes was virtually unheard of in the Marshall Islands. People were slim and active and lived off the land. The diet consisted of such edible plants as coconut, breadfruit (a starchy fruit that grows on trees and is nutritionally similar to potatoes), taro, pandanas (a huge, extremely fibrous fruit with carotenoid-rich, juicy orange pulp) and leafy greens, in addition to fish and other seafood.

Today, with considerable overpopulation in Majuro, approximately 80 to 90 percent of all food calories are supplied by imported foods. The most costly imported foods are fresh fruits and vegetables and other perishables. By ship, they arrive every 28 days, and by air, every two weeks. In most of the outer islands, indigenous foods supply 50 to 75 percent of food calories. While health authorities promote local foods in urban centers, there are simply not enough local plants to supply food for the entire population on small, over-populated islands. Most people are poor and live in crowded households with very limited food budgets. Many Marshallese believe that getting enough to eat is the only real issue where food is concerned. They often do not buy into the idea that certain foods are more healthful than others. Local food is generally more expensive per calorie than imported food and less abundant, being dependent on the season and weather conditions.

What would it take to halt the diabetes epidemic in the Marshall Islands? There is little doubt that it would require a deep understanding of the culture, a respect and love for the people, significant insight into type 2 diabetes and a great deal of perseverance and determination. Enter Canvasback Missions and their founders, Jamie and Jacque Spence. Canvasback Missions is a unique non-profit organization that has been providing free medical, dental and eye care to the people of the Marshall Islands for more than 25 years. Jamie and Jacque Spence witnessed the unfolding of the diabetes epidemic. They were desperate to find a way to stop the devastation. After several years of efforts, they were awarded a research grant, and the Diabetes Wellness Project came to life. The goal of the program was simple – to reverse the diabetes epidemic through aggressive diet and lifestyle intervention. Canvasback enlisted key partners, such as the Marshall Islands Ministry of Health and Loma Linda University. A team of experts was assembled including Dr. John Kelly (president of the American College of Lifestyle Medicine) as co-principal investigator, Dr. Ralph Harris as medical director, and myself, Brenda Davis, as lead nutritionist and health educator. Dr. Harris and I were asked for a commitment of three weeks training in Guam and six months research in Majuro. In my case, the time stretched to eight months on the island, with ongoing trips back and forth of three to six weeks duration each time. My husband, Paul and son, Cory, joined me for the first five months.

The next step was to put of all the elements required for rigorous scientific research in place. This is a complicated task in a developing country with limited technology and a significant language barrier. English is a second language, spoken with various degrees of fluency by more educated Marshallese (the first language being Marshallese). Local personnel were recruited, interviewed, employed, motivated and mentored to become support staff. Computer systems were set up, and a massive screening of patients was initiated. Protocols were established for lab work. Research forms, handouts, recipes and lectures were developed. Relationships were established with Marshallese and American dignitaries, Ministry of Health personnel, community group leaders and store managers. Contact with our U.S. team members was limited by a very costly phone service and slow, unreliable Internet service.

The first intervention began in June 2006. Since that time, two additional interventions have taken place – one in September 2006 and the other in March 2007. The results of the intervention have been at times amazing and at times disappointing, but always informative.

As you may recall, during the first two intensive weeks of each program, participants are fed three meals a day. They are at the Wellness Center for either breakfast or lunch, and dinner. The alternate meal is sent with the participants in a cloth bag. Our main dietary goals are weight loss, blood sugar control and normalizing blood cholesterol, triglycerides, blood pressure and inflammatory measures. The ultimate objective is to reverse diabetes by overcoming insulin resistance and restoring insulin sensitivity. The most effective way of accomplishing this task is with a carefully designed vegan diet and exercise. The dietary parameters for the intensive phase are as follows:

Following the two-week intensive phase, all dietary parameters remain the same, with one exception. Participants are permitted limited consumption of clean, boiled, steamed or grilled fish, if desired. Many participants choose to avoid fish for the entire duration of the study.

What do clinic meals consist of? Breakfast always includes beans and greens – a one-pot bean dish with whatever greens were available. We also served an intact whole grain cereal (often a barley/kamut blend) with nuts, seeds, ground flaxseed and soymilk, and a fruit salad laced with psyllium and guar gum (soluble fiber). Breads, muffins and other ground grain products are minimized. Lunch is generally “take-out” with a light green salad or raw vegetables, a heavy bean-based salad (sometimes including yams, corn or intact whole grains) and a piece of fruit (usually an apple or orange). Dinner includes a large green salad or a light soup and a bean or tofu and vegetable-based entree. Concentrated carbohydrates, such as potatoes and rice, are usually avoided at the evening meal.

In addition to a finely tuned vegan or near-vegan diet, participants receive daily education about nutrition and health. PowerPoint presentations, practical workshops and shopping tours are all a regular part of the basic program. To help increase the access to affordable produce, participants are taught how to grow their own gardens in earth-boxes. Soil and gardening experts are brought in to conduct lectures and workshops.

Exercise is also an integral part of the program. During the intensive phase, participants take part in a one-hour daily exercise class, in addition to at least two walks – before breakfast and after dinner. Following the intensive phase, participants are encouraged to continue coming to the clinic for daily exercise and/or to increase walking times. The fitness programs include a balance of cardiovascular, strength and flexibility exercises.

Now, for the million dollar question – did it work? During the first two weeks of the program (when three meals a day were provided by the Wellness Center), the success was remarkable. Consistently, participants reported dramatic reductions or complete disappearance of pain in the legs, arms and joints. They no longer required massages at night to reduce leg pain so they could sleep. Walking became much easier. Many reported significant reductions in nightly trips to the bathroom. Most noticed tremendous changes in their bowel habits, with greater frequency and bulk of stools. One person reported severe constipation with bowel movements once every 10 to 14 days. Within a week of beginning the program, he was having normal daily bowel movements. Almost everyone reported increased energy. Weight loss averaged about five pounds per person.

Blood tests indicated impressive changes as well. Fasting blood sugars declined 50 to 75 mg/dL, cholesterol went down about 20 mg/dL and triglycerides dropped close to 40 mg/dL. It is important to note that these changes were seen even with a dramatic reduction in medication use. Close to 90 percent of the participants stopped taking oral hypoglycemic agents, cholesterol, blood pressure and other medications.

At 12 weeks, average weight loss was approximately 10 pounds per person. Blood sugars were still down about 30 points from the beginning of the intervention, and HbA1C was down an average of two points. HbA1C is a blood test that measures control of blood sugar over a three-month period. Optimal HbA1C is under 5 percent. HbA1C of 7 percent or more indicates poor blood sugar control and increased risk of complications due to diabetes. A two-point drop in HbA1C is extraordinary. Every 1 percent the HbA1C drops, the risk of health complications drops by 30 to 40 percent.

Changes seen after 12 weeks were more variable, with compliant participants making remarkable recoveries, while others slowly regressed. Those who experienced regression were participants who stopped coming to sessions. Unfortunately, most of these individuals did not resume taking medications. While these individuals generally improved their overall diet and lifestyle, without their meds, some ended up with lab values similar to baseline. Of course, this is still an improvement if lab values are the same without meds as they are with meds, but the advantages are difficult to quantify. In these cases, it would be preferable to have patients resume medications and enjoy significant improvements in lab values.
On the other hand, the stories of committed participants are truly inspiring. One of our most skeptical subjects, a health care worker, brought her fasting sugar from 187 to 108 and her HbA1C from 8.7 to 5.7. Some of our newly diagnosed diabetics brought their blood sugars below the cut off of 126 mg/dL and their HbA1Cs below the goal of under 6 percent. Several other participants saw drops in HbA1Cs of three points or more – from 9 or 10 percent to 6 or 7 percent. Although we had only a few participants on insulin, all of them had to discontinue its use. For many of our participants, these changes were nothing short of miraculous. In the Marshall Islands the view of diabetes has always been of a devastating disease with a very slippery slope. It is impossible to escape the experience of seeing family members, friends and neighbors lose their vision, their limbs and their lives. To witness recovery or healing from this dreaded disease was unheard of.

While participants face barriers to success, program staff works countless hours to help each individual overcome these barriers. Medical follow-up is expanding; social barriers are being investigated and more fully addressed; store managers are bringing a greater volume and selection of healthful foods; restaurant owners are adding “Diabetes Wellness Program Approved” options to their menus; exercise opportunities are expanding; lectures and handouts are being translated, and Marshallese staff are being trained.

Many people have asked me if this program could work here in America. My answer is simple: If there is hope in the Marshall Islands with the enormous barriers the people face, there is hope at home. We have no excuses.