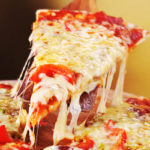 Researchers at the University of Michigan set out to rank the most addictive foods using the Yale Food Addiction Scale. The study involved the dietary habits of 500 college students. The results were far from surprising: pizza ranked top among the addictive foods. The reason? The addictive nature of cheese. Scientists point out that a chemical called casein is prevalent in cheese (and other dairy products); when digested, casein releases casomorphins (an opiate) into the blood stream, producing an effect similar to those experienced after morphine or heroin use. According to Cameron Wells, a registered dietitian, the casomorphins“ really play with the dopamine receptors and trigger that addictive element.” Similar effects occur when ingesting high-fat and highly processed foods.