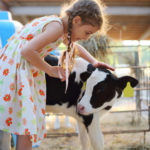 “You care more about animals than you do about people.”

Advocates for animals hear this often, slung at us as though we’re traitors, defectors to our tribe of humans – allowing our fellow man to languish and suffer while we tend to the needs of mere animals. Let’s set aside for a moment the question of how many of us do care more about seeing to animals’ needs and why that might or might not be a legitimate stance to take.

The fact to consider is that this catchphrase, if coming from a meat-eater, is beyond the pot calling the kettle black. In fact, eating animals causes a great deal more human suffering than does going without.

The amount of harm done to humans by the animal industry is enormous and no other industry gets away with such harms on this scale. It persists, frankly, because so many people make their food choices without fully thinking about the broader implications for their neighbors or themselves.

How much harm are we talking about? Let’s start on the broadest scale: Livestock production helps fuel global climate change, accounting for anywhere from 18 percent (U.N. estimate) to 51 percent (Worldwatch Institute) of all greenhouse gases.

Let’s stop right here for a moment to consider that even if acceleration of global warming were the sole bad effect of meat-eating, those who abstain
would already have a decisive edge in the “who cares more about fellow humans” question. But the harm to humans goes further than that. Much further.

The entire human population is also threatened by animal-derived viruses (e.g., bird flu, swine flu, SARS, tuberculosis) and factory farms are prime incubators of many of these, says the Pew Commission on Industrial Farm Animal Production.

Among other “public health threats” the commission names is the careless use of antibiotics on healthy animals, a way of minimizing the spread of disease among animals in disease-friendly conditions. This accounts for more than 70 percent of all antibiotics used, which fosters new, stronger strains of disease, weakening the drugs’ effectiveness for sick people.

Add to this the outsize consumption of an ever- more-precious resource – fresh water – and already the livestock industry is bad for people as a whole.

Locally, the impact is more direct, the problems more acute. Air and water emanating from factory farms are said to cause breathing problems among their neighbors. The Pew Commission stresses that the gases generated by factory farms are associated with respiratory problems, such as asthma, for “communities proximate to [nearby] those facilities, as well as populations far away from these operations.”

The commission also cites “depression and other symptoms” attributed to animal-farm emissions. Manure contamination of sources of drinking water is also a danger, given the toxicity of E. coli and the potential effects of hormones in contaminated water.

But you’ve gotta take the bad with the good, the thinking goes, and the good is: Jobs.

Even that, though, is mostly hype. Certainly, a few people get very rich off of livestock, but in general, workers are exploited right along with the animals.
Dairies and slaughterhouses are often staffed by immigrants (illegal or not) who have little choice, and less voice, in their dangerous daily tasks. Injuries from corralling and dismembering large animals get downplayed, as the workers know they’re dispensable – and invisible.

Articles such as “The Chain Never Stops” in Mother Jones and such books as Gail Eisnitz’s Slaughterhouse have compiled both stats and personal stories detailing the misery, pain and horror these jobs entail for the down-on-their-luck populace that meat companies count on to tolerate such an abusive, violent work environment.

“It’s a job with lots of risks. If I had papers, man, there’s no way I’d be working in a dairy. But in this town, this is the best job I can get,” she quotes one illegal immigrant worker as saying. “Every worker I know says they’ve been kicked or stepped on by a cow. It’s common. But one day (the cows) might break your bones, or maybe even kill you.”

“Between 2004 and 2007,” Clarren continues, “nearly seven of every 100 dairy workers were hurt annually on average, compared to 4.5 out of 100 for all private industries. Beyond using tractors and heavy farming equipment, dairy workers interact with large, unpredictable farm animals – work that ranks among the most hazardous of all occupations, according a 2007 article in Epidemiology. Plus, they breathe air laced with bacteria and manure dust, putting them at risk for long-term respiratory disease.
Clarren notes that “The majority of the West’s nearly 50,000 dairy workers are immigrants,” and adds perspective from Marc Schenker, director of Occupational Safety and Health Administration’s (OSHA) Western Center for Agricultural Health and  to Safety: “If you’re undocumented, you won’t complain. You won’t ask … not do a task you think is dangerous. These things lead to workplace injuries.” Shenker stresses that “[t]heir injuries aren’t inevitable; they’re the failure of our system to do the right thing. It’s not only an injustice but a tragedy.”

Animal-industry work takes many forms – and so do its tragedies: Although hundreds of children and adults were likely scarred for life by witnessing trainer Dawn Brancheau’s death at a SeaWorld show, at least she died doing a job she loved. Dairy and slaughter workers encounter horrific workplace accidents (and fatalities), without the media attention.

The effect of the gruesome workplace dangers is damaging, and, as with environmental degradation, it also washes downstream.

A recent study found that even after controlling for demographics, race, unemployment and other supposed crime-related factors, a stark correlation remained: “Slaughterhouse employment increases total arrest rates, arrests for violent crimes, arrests for rape, and arrests for other sex offenses in comparison with other industries. This suggests the existence of a “Sinclair effect” [referring to Upton Sinclair, who noted
Care More About Animals  in The Jungle that slaughterhouse work seemed to make employees more violent and combative once their shifts were completed] unique to the violent workplace of the slaughterhouse, a factor that has not previously been examined in the sociology of violence.

Yes, the killing of animals – not just those in factory farms, note, but also the “humanely raised” ones spotlighted at Whole Foods – apparently leads to the killing of people, as we might expect given the many studies that show children who violently abuse animals are most likely to grow into human-abusing sociopaths.

Lastly, let’s remember consumers themselves, who raise their risk of hypertension, heart disease, cancer and stroke with every bite of meat. Add to this an additional 76 million cases of foodborne illness and 5,000 deaths each year, overwhelmingly caused by fecal contamination by livestock.

All of these harms are related: Since most people don’t want to watch what they’re paying to have happen to animals, meatpackers routinely break both humane- handling and food-safety laws. Earlier in 2010, an 18-year United States Department of Agriculture (USDA) veterinarian testified before Congress in conjunction with a Government Accountability Office (GAO) report showing enforcement of humane slaughter laws is lacking.

Dean Wyatt outlined violations of the Humane Slaughter Act he witnessed on the job, stuff like “aggressively” unloading animals, letting pigs slip and trample one another, and shackling and bleeding out pigs while they were conscious. He found his efforts to call attention to these systemic abuses thwarted, though.

“FSIS [Food Safety and Inspection Service] officials who were hundreds of miles away simply took company personnel at their word that the egregious events I had personally witnessed did not justify my actions,” Wyatt said in his testimony before lawmakers. After speaking up about problems, he faced retaliation from the agency.
If the agency’s not watching close enough to see such violations, they’re going to miss others. The USDA Inspector General recently found that “Beef containing harmful pesticides, antibiotics and heavy metals is being sold to the U.S. public because agencies are neither setting limits for them or testing for them.” In
one case a shipment was so contaminated it was turned back by Mexico – and then sold to U.S. consumers.

Big surprise, huh? The same people who don’t worry about causing animal suffering also don’t give a hoot about meat-eaters or their health – only their dollars. And many continue to fork over those dollars, while forking these products into their mouths.

Conversely, living a nonviolent, compassionate life is good for us and good for the planet. A vegan lifestyle avoids almost all of the bad effects described above.

In short, going vegan means giving your fellow humans – as well as the animals – a break.

VANCE LEHMKUHL is a vegan writer, cartoonist and musician. In addition to Vegetarian Voice, his writing has appeared in The Philadelphia Inquirer, Philadelphia Daily News and Z Magazine. He’s known for penning a collection of vegetarian cartoons, The Joy of Soy, for his long-running strip “Edgy Veggies” in Veg News, and for his live improv cartooning on veggie themes. He’s also the founder of the eco-pop band Green Beings and the host of Vegcast, a well-known vegetarian podcast.